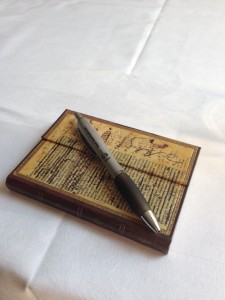 What a fantastic week! I had an absolutely fab time at Harrogate Crime Festival. It’s held every year in The Old Swan hotel, and this year was my first time attending the whole thing. It’s set out in such a way that normal readers, aspiring writers and big time authors all get to socialise and meet each other and chat.

I picked up my tickets from the venue on Thursday afternoon and was surprised and pleased to be handed a book bag containing 6 novels, some of which were unedited proof copies direct from the publishers which aren’t actually due out until next month! Over the moon is an understatement and this trend continued throughout the weekend meaning I actually came home with 10 books to read!

The opening ceremony on Thursday evening saw the amazing Ruth Rendall receiving an award – 60 books written in her lifetime – what an achievement! And the 2013 Crime Writer award went to Denise Mina – now I have to be honest and say I haven’t read any of hers but she’s definitely on my to read list now.

Friday started with a guest spot with Ruth Rendall in which she was interviewed by Jeannette Winterson – it was heart-warming to watch and Ruth is a very witty and funny lady. I quickly made firm friends with another author, Eileen Wharton who lives relatively close to me, and is very encouraging and a positive person. We hung out a lot throughout the events in general. I then attended an event on Victorian Crime:Fact or Fiction – initially I was tempted not to bother with this event as I don’t write historic fiction but I got chatting in the bar to Lyndsay Faye, an american author who writes a kind of mish mash using the Ripper and Sherlock Holmes among other things. It was an insightful event and even left me tempted to consider this section of the crime genre in the future.

The next event I attended on the Friday was Social Media:Who are you – this was by far my favourite event of the day. Presented by the very funny Mark Billingham, with panel members consisting of Ruth Dudley-Edwards, Erin Kelly, Steve Mosby and Sarah Pinborough, it started with the audience being asked to live tweet – those who follow me on twitter will know I did just that! There was a lot of chatter about general social media, a little bashing of Steven Leather who, it turns out is an atrocious bully and has in fact had a campaign going since the last festival slurring the names of Steve Mosby and Sarah Pinborough – absolutely shocking behaviour from a supposedly grown man and author, and I would never purchase his books as a result.

The saturday listing was every bit as good, starting with me and Angela Davies of CSI Training and Events attending a discussion on Forensics hosted by Val McDermid and Sue Black, who is the foremost lead on Forensic Anthropology and Human Anatomy. I sat, enthralled in the whole event despite the sweltering heat and was most definitely in awe. I may even have had my mouth open a little catching flies as Sue regaled the audience with tales of prostitutes heads in buckets that she had to transport via the airways to her lab in Dundee. We then went on to attend a panel hosted by Ann Cleeves on the hit show Vera, in which the producer, screenwriter and indeed the actress Brenda Blethyn were present! Saturday led into the evening event myself and Angela had booked for, a mystery bond themed dinner! All day and all the way through the queue to get in I prayed to be on Chris Ewan’s table (there was an author for each table and I love Chris’s first crime novel Safe House) and lo and behold, we were placed on his table! We didn’t win the prize for solving the mystery but it was absolutely fantastic to sit and chat with Chris who is a lovely down to earth guy. We also got a signed copy of his latest book which pleased me muchly! We made good friends with some other people at the table, notably the wonderful Terry and Sue Wilkinson who joined us outside at the bar where we had an absolute scream. When they left for the evening, we were then joined by a very merry Sarah Pinborough, John Niven, Nick Ball (son to the lovely TV presenter Johnny Ball and brother to the pretty Zoe) and John’s german publisher. We spent a good while laughing and chatting before turning in at around 130am.

The whole event was designed in such a way to encourage interaction and socialisation. The likes of Val McDermid, Lee Child, the above named and many more just frequenting the bar area and the outside seating areas and being happy to chat or sign books. The whole atmosphere was absolutely fantastic – I came home feeling tired, happy and sad all at once! It’s funny to think that at the start of the weekend I was very nervous, in fact I spent the first part of friday morning sitting in a corner, my mouth agape as Ann Cleeves and Mark Billingham entered the bar and sat chatting. I don’t know what I’d expected, or even why I was so afraid initially, but I soon came out of my shell and started embracing the experience. I’m already planning on pre-booking for next year!

Those who read regularly may well realise that I have been in the process of creating a new Facebook profile and transferring my friends over – the reason for this is my previous profile was a personal one and I had an author page set up – unfortunately with Facebook changing the guidelines on people being able to view my posts on the page, I found that my page traffic had rapidly decreased and that my posts weren’t reaching everyone on my list. So i made the decision that one page would be the way forward – the posts will remain as they always have been when writing on my page, the majority will focus around my writing and what’s happening in that side of my life.

With everything going on this weekend, you’d think I wouldn’t have had time to write or read – but I managed both! I wrote another 4000 words on my second novel which is now a touch over half way through, and even managed a half hours reading in there too! Need to finish my current read, Hooked by Tiffinie Helmer (romantic suspense) so that I can get started on my new pile!

That’s pretty much it for this week anyway – it’s been an exciting one with lots to write about, and some of the things that happened I haven’t even mentioned despite them being exciting! (I don’t like to name drop or anything haha). The photo above was taken by myself – it’s my trusty handbag notebook with a lovely free pen courtesy of the festival. Thanks, as always for reading and have a fantastic week 🙂