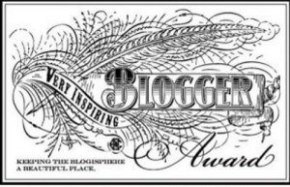 Thank you to the lovely Gemma Wilford for nominating me for the ‘Very Inspiring Blog Award’. Gemma has had her first novel, The Ruby of Egypt published and is currently working on her second, Miss Pooshoe.

So, here are the rules:

It’s actually pretty hard to think of things that not a lot of people know. I got to number three and had to pause for a cup of tea! Anyway here goes – you’re about to get to know me a little better……

1. When I was in my early twenties I was a DJ/Karaoke Compere – I worked the local pubs and clubs, often working 4 nights a week. I was then, and always have been a lover of music – liking pretty much every genre. I also used to work in a local pizza shop.

2. When I was getting fit to apply for the police force, I attended a thai boxing class twice weekly. I’d been going for one month when I dislocated my left knee cap and had a full leg cast on for a month – subsequent to this it dislocated another 6 times meaning I had to look for a new career opportunity – this is how I eventually came to settle on going to University as a mature student to get my Bsc Crime Scene Science.

3. When I was in primary school, I used to hand write small illustrated books about cats for my teacher and staple them together so they looked like a real book. She still had them when I was 16yrs old.

4. I have a disabled brother, Michael who has spina bifida, hydrocephalus and epilepsy – when I was a child I used my left hand to write on the wall under the stairs and blamed him. I owned up eventually but he got so wrong for it! And now you all hate me – but it was just a brother and sister thing! He used to blame me for stuff all the time too!

5. On my first holiday abroad with my now husband, I got bitten by a mosquito and ended up ill for the whole holiday – we had only been together 8 months at this point – he still proposed on that holiday despite my whinging so it all turned out well in the end.

6. I have a bit of a tattoo fettish – I personally have 5 tattoos and would love to have more – I also love looking at other people’s. All of mine were designed by myself, and I have designed several for other people also. I’m particularly fond of tribal designs though I only have one of these myself.

7. It’s a little ironic being nominated for an inspiring blogger award – my posts, as you all know are generally upbeat and hopefully positive and inspiring – what a lot of people don’t realise though is that I suffer from depression, and have done on and off since my early twenties. It has been so severe at times that I have contemplated suicide. I do currently take medication for this. The main reason I remain positive is that I don’t want depression to rule my life, or dictate what I can and can’t do. I have bad days, less often now that I did even 18 months ago, but I always believe that tomorrow is a new day – this helps me cope with how I feel and hopefully provide a little inspiration to others along the way.

So now I have done this I would like to nominate the lovely Helen Anderson, and the enthusiastic Chris Robinson for this award – I look forward to your blog posts ladies. Thanks again to Gemma for the nomination.