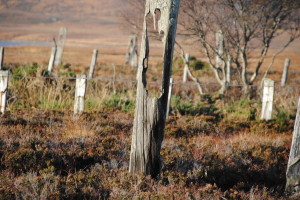 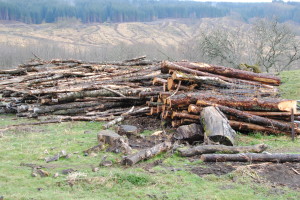 Simply can’t believe how fast time is passing currently. It’s almost the end of August – this year is literally flying by! I’ll tell you what though, it feels good to be back in the land of the living and not just the existing. The above photo’s were taken by me on one of my visits to Scotland – the left one is the remnants of the old railway that ran along the strath where my aunt lives, and the other was a pile of felled wood from a field somewhere near Blair Atholl. Love how rustic they both look 🙂

Michael is loads better, pretty much back to his old self which I’m not entirely sure is a good thing or a bad thing! He was demanding before his hospitalisation but now it seems non-stop, and I know my mum gets the brunt of it even more than me! She has the patience of a saint my mum, and she definitely deserves her up coming holiday in a couple of weeks. Two weeks of sun and someone else doing the running about will do her the world of good, and I’m sure she’ll have a fantastic time. Me and Pete are also planning holidays – or hopeful that we will be planning in the near future for our time off together in November. Seems ages away doesn’t it? But at the rate this year is going it’ll be a blink and you miss it scenario!

I was very saddened earlier this month when I learned of Robin Williams death. I grew up loving movies like Mrs Doubtfire and Hook, and being moved to tears by the more poignant Good Will Hunting and Dead Poets Society to name but a few. I’m not ashamed to admit I shed tears – such a wonderful man, devoted to his family, right to the end in my opinion. I suffer depression, and I know many people who feel or have felt the darkness pulling them in, but to have such a disease and be constantly in the lime light, with millions of people watching and waiting for something to slip, never having a moments peace, and then finding out about having Parkinson’s – must have been dreadfully hard for him. I feel bad for his family, but he must have seen no other option, which in itself is so sad, but I’m one of the ‘suicide isn’t selfish’ crew I’m afraid. I think he did what he did cos he felt he had no other option – maybe he didn’t want to put his family through the parkinson’s too, maybe he was just so sick of everything, we’ll never know. But I do know, he’ll be missed. I miss him, and I never even knew him. I sat and watched Jack after the initial shock had worn off, and was moved to tears again by his speech at the end of the film. Very fitting in the circumstances.

After having complete writer’s block the whole time Michael was in hospital, it’s been good to knuckle down and crack on with book 3 since my last blog post. I’ve whacked off a whopping twenty two thousand words in the 3 weeks since my last post so am over the moon! Book 3 is very close to the first draft being completed now. So close, I can almost taste it. Then, as much as I really want to start researching for book 4 and getting to know my characters, I can’t – I NEED to finish editing book 2 and edit book 3 before i even start thinking about writing book 4 or it’ll end up a never ending cycle of unfinished work! Editing, unfortunately, is one of my pet hates – I adore the initial writing stages, the redrafting too, but the editing I just find so tedious! Naughty I know, but all writers have their favorite parts of the writerly process! I’ve set myself a new deadline of finishing book 3 before the end of August which really isn’t that far away now. I figure roughly another five thousand or so to go then I can type those two amazing words – the end!

It’s been amazing that I’ve found the time to write lately with everything I’ve had going on, work has been manic, it’s been the summer hols so have been trying to spend time with friends and their children, as well as my family. But that’s what it’s all about isn’t it – just spending time together and being happy doing it has been fantastic. I’ve also been super organised and written out my christmas lists, gone through the present cupboards and discovered I’m probably 2/3 of the way done on the shopping! I know, you hate me 🙂 *smug smile.

I’ve just finished the most amazing book too – Mo Hayder’s The Birdman (rapidly followed by The Treatment!) How I’ve never read any of her novels until now is a mystery to me! Both of them had me hooked from start to finish. Have got the next one in the Jack Caffrey set in hardcopy and can’t wait to get dug in. That said, I’m reading Dating in the Dark by the lovely Pete Sortwell at present – light hearted, easy to read and Pete has a wonderful style of writing. Definitely worth picking up if you fancy something different. After Harrogate, my to read list has increased exponentially – I’m making sure I put aside reading time now though as well as writing time. Nothing better than a good book and a hot cup of tea!