Well what a wonderful picture to start my blog with (obtained from the Morritt’s own website)! The above is a front view of The Morritt, at Greta Bridge, just off the A66. This was the location for the amazing writing retreat I went on this week with the lovely Victoria J Brown (http://www.victoria-brown.com/) and the equally lovely Eileen Wharton (https://www.facebook.com/eileen.whartonwriter). The event itself was hosted and organised by Judith Lesley Marshall (http://judithlesleymarshall.com/). The day started with myself, Vicky and Eileen heading to MacDonalds for breakfast, naughty I know but I had just finished night shift at 3am so was entitled to a little greasy energy. Some of us enjoyed it, some not quite so much but it was all good as we jumped into my car and headed down. Naturally, I misjudged the time it takes to drive there and we arrived over an hour early, which to be fair gave us the chance for a good girly natter discussing the virtues of hair dye, drunkenness and of course, throwing up in your fish nets (I’ll point out I don’t own fishnets so that one wasn’t me!!)

This was my second writing retreat at this location, and I can honestly say it’s worth every penny. There were about 12 of us in total, and we chatted during the networking times with a cup of freshly brewed coffee and home baked shortbread and cookies. It’s always interested to me to chat to other people of the artistic variety, and the types of artist at these venues are so different! We had poets, crime writers, chick lit writers, a graphic designer who was looking for other directions to branch out into, and people just wanting to get something down on paper. It provides a lovely environment, with dedicated ‘head-down’ time to write which just inspires creativity. If you ever get the chance to go on one I highly recommend it – if you’re unsure of when these come up in the North East drop Judith a line, there’s a link to her website in my links section.

As a result of this retreat, myself and Vicky got chatting to Tony, the graphic designer, and a ‘co-workers’ networking event came up in conversation which was set for the following day. I’d never heard of this, but basically it’s an event where people who do solitary work at home can meet up with other solitary workers in an environment that promotes co-working for the day. It was discussed and we quickly agreed that if there was spaces then we would also attend this event. Unfortunately Eileen had to work (dratted day jobs) but the following day myself, Vicky and Tony pitched over to Dovecot Street in Stockton where we met the lovely Rebecca Sergeant (http://www.colleaguesontap.com/) of Colleagues on Tap, and the other lovely people who attended the event. I must admit to being nervous, I’d never attended an event like this and didn’t quite know what to expect. But, everyone was so friendly, and eager to share the jobs they did at home. Everyone sung the praises of the Co-Worker days and I have to agree. For people who work in solitary roles these days give the perfect opportunity to network as well as do some work. They’re easily accessible and operate all over the North East. Rebecca was an very gracious host, constantly making tea and coffee for everyone, and the lunch from a local deli was really tasty (it’s included in the price too!)

Suffice to say over the course of these two days I met a lot of really nice people, no doubt some of whom I will see again and perhaps one day, utilise the services of. I also managed to write a whopping 7100 words on book 3 which was fantastic, The days left me feeling invigorated, inspired and admittedly a little tired, but it has been fantastic. I’ve added some of the contacts I made to my links page so if anyone’s interested in speaking to them, you can drop them a line directly. 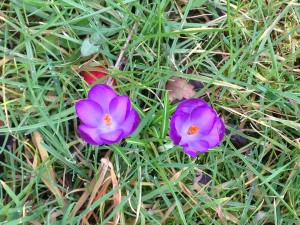 It really has been a busy few weeks! Even just the above days aside, I’ve gone back to my ‘day job’ after 4 weeks off, which were mostly due to illness – I’ve had a really bad sinus infection which somehow managed to invert both my ear drums – honestly I was so ill, I couldn’t even write! I am getting there now though you’ll be pleased to hear though test results pending on some further bloods. I’ve been scribbling furiously over the last couple of weeks and have managed to get to 31,000 words on book 3 which isn’t bad going at all! I’ve had an interview for a VCSI job which I hadn’t mentioned much about online as didn’t want to jinx anything but I should find out next week if I’ve been successful. If not then no problem, though I really would like to get back into forensics. My current job is fine and the new shifts I’m on do provide more writing time. And I’ve been looking round at pretty things to photograph, like the crocuses above, I love the vibrancy of this image. The flowers actually look painted on!

My next set of rest days will incorporate a submission day where I shall send book 1 off to prospective agents, as well as further writing time. I’ll be taking my trusty notebook to work also so I can work on it during lunch breaks etc also.

I love how the future looks at the present time, it’s great to know that I’ve finished writing 2 novels, have a third being written, and a basic plot line for a fourth. I bask in the knowledge that one day I will be published and people will be able to read my novels, and not just hear about me talking about them, or read the taster prologues on this website. Who knows what else the future holds, but I know whatever I want, I can make it happen. Such is the nature of dreams.

That’s it for this weeks blog – take care and keep smiling 🙂 I know I am.